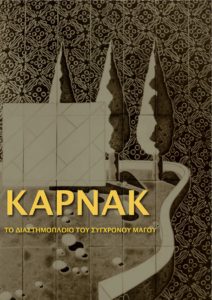 “The spaceship of the contemporary wizard”

These pieces of music were collected by the Greek philosopher of Pontus Georgios Georgiades (known as G.I. Gurdjieff, 1866-1949). He wrote down and orchestrated them with the help of his pupil Thomas de Hartmann of the Imperial Opera in Saint Petersburg. Gurdjieff’s “Movements” -“Sacred Dances” that constitute an inseparable part of his spiritual teaching- are performed on this music.

“…A work of objective art ought to be a book, the only difference being that the artist transmits his ideas not directly through words or signs, but through certain feelings which he excites consciously and in an orderly way, knowing what he is doing and why he is doing it.” (Gurdjieff)

Thanks to its pioneering sound and Maria’s Peretzi open-minded orchestration, “Karnak” concert captures and expresses the essential and robust nature of the philosophy bequeathed by Gurdjieff. The amazing vocals as well as the combination of western and eastern instruments generate a configuration of timbres and emotional nuances challenging, thus, all mainstream sounds and facilitating the East-West dialogue in an environment of intense political, social and religious polarization.

The unique esoteric spirituality of this music enables Gurdjieff’s philosophical work and its significance for the world to be deeper perceived and realized.

We use cookies on our website to give you the most relevant experience by remembering your preferences and repeat visits. By clicking “Accept All”, you consent to the use of ALL the cookies. However, you may visit "Cookie Settings" to provide a controlled consent.
Cookie SettingsAccept All
Manage consent

This website uses cookies to improve your experience while you navigate through the website. Out of these, the cookies that are categorized as necessary are stored on your browser as they are essential for the working of basic functionalities of the website. We also use third-party cookies that help us analyze and understand how you use this website. These cookies will be stored in your browser only with your consent. You also have the option to opt-out of these cookies. But opting out of some of these cookies may affect your browsing experience.
SAVE & ACCEPT