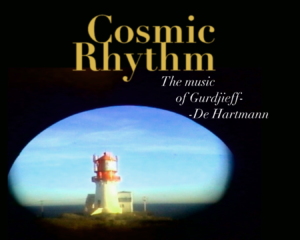 Gurdjieff’ s music is particularly original, dynamically austere and widely expressive. Its roots are to be traced in traditional melodies, dervish music, dances and liturgical religious hymns from remote monasteries and holy places in Asia and Northern Africa, collected by Gurdjieff. Upon his return to Moscow, and later, in Paris and New York, he wrote down and orchestrated these melodies with the help of his pupil Thomas de Hartmann.

Takis Paterelis was born in Athens. He started piano lessons at the age of six in the Athens Conservatory under the guidance of Aliki Vatikioti. He graduated con laurea, and later studied jazz, improvisation and orchestration at the Berklee College of Music in Boston. As a saxophonist, he has collaborated with prominent Jazz musicians in Greece, Europe and America, and has worked extensively with students. Since 2005 he is a member of RODA Theater, where the ideas of Gurdjieff are studied through the theatrical and musical experience under the guidance of Maria Peretzi. Takis Paterelis has participated in a series of public concerts produced by RODA Theater, performing Gurdjieff music.

We use cookies on our website to give you the most relevant experience by remembering your preferences and repeat visits. By clicking “Accept All”, you consent to the use of ALL the cookies. However, you may visit "Cookie Settings" to provide a controlled consent.
Cookie SettingsAccept All
Manage consent

This website uses cookies to improve your experience while you navigate through the website. Out of these, the cookies that are categorized as necessary are stored on your browser as they are essential for the working of basic functionalities of the website. We also use third-party cookies that help us analyze and understand how you use this website. These cookies will be stored in your browser only with your consent. You also have the option to opt-out of these cookies. But opting out of some of these cookies may affect your browsing experience.
SAVE & ACCEPT